Dressing up is really not a big thing anymore, save for those who genuinely enjoy getting dressed up. For everyday people, there aren’t many events that require formal or even semi formal attire. When I was growing up, everyone dressed up for church, weddings, funerals, and even some family gatherings. Nowadays, a t-shirt, jeans, and sneakers are acceptable apparel for most occasions– and no one could be happier about that than me.

For years, I didn’t own a pair of sneakers. My hair was always done, and I was always in full make up. However, today, I have a shoe closet full of sneakers. I can’t remember the last time I was in a salon, wore a dress, skirt, or high heels. If the occasion for me to get fancy should arise, I could definitely do it well, and and carry myself appropriately. These days, I prefer comfort to lavish. On any given day, you can find me in jeans, a t-shirt, mix-matched socks, and shell toes.

You Are What You Wear

A t-shirt is pretty much a blank canvas. It can be worn blank, and look good. But they are much more fun when they are decorated with our favorite people, slogans, logos, and any other things that express who we are as individuals. That is why I like to wear them. Much like my Afro, t-shirts are a form of self expression.

Can You Back Up Your Statement?

A few years ago, Marilyn Monroe t-shirts were the trend. Women of all races, and classes were wearing them. I’m a fan of Ms. Monroe, but I never had one (mostly because I tend to shy away from doing what everyone is doing– but that’s another blog). During the trend, there were a few Black women who took umbrage. They felt that we had our own Black sex symbol from that era, Dorothy Dandridge (who I am also a big fan of), and that Black women should instead, wear images of her.

Although I did not disagree, I had to wonder how much they knew about Ms. Dandridge. Aside from they learned from the Halle Berry movie, “Introducing Dorothy Dandridge“, had they taken the time to learn more about her? Had they even heard of her? Did they know that Ms. Dandridge and Ms. Monroe were friends? Or would they have worn a Dorothy Dandridge t-shirt simply because she was Black?

I (and my tendency to play the devils advocate) began asking women who felt that way what they knew about Ms. Dandridge. I know what I knew about her. As a fan of old Hollywood, I’m confident that I know a lot about her. However, most of the women that I asked, didn’t know much about her that was not portrayed In the 1999 movie. Some seemed annoyed by the question.

One day, I was at my local Walmart when I saw a woman wearing a Marilyn Monroe t-shirt in the check out line. I struck up a conversation with her while we waited in line. During the conversation, I eventually asked her what was her favorite Marilyn Monroe movie. She quickly admitted that she had never seen any of her movies and didn’t know much about her; she only liked the shirt. Somehow, I knew she was going to say that, but I was hoping to be pleasantly surprised.

If You Wear It, You Represent It 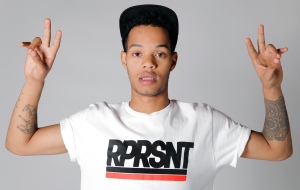 When you wear a depiction of a person, saying, logo, or team, on a t-shirt, tattoo, or anywhere on your person, you are telling the world that you are proud of said images, and that you represent them–so you’d better know a lot about them. By ignorantly donning random images, you could very easily send a message to those who chance upon you that you are for issues, and machines that are built to rage against you. You’ll look foolish, and you’ll feel foolish when a stranger informs you of what you are wearing, and what it means.

I’d have more respect for a Black woman, who is a fan of Marilyn Monroe, wearing her image on a t-shirt, than for a Black woman who is wearing a Dorothy Dandridge t-shirt, yet knows nothing at all about her. In doing that, it gives the legacy of Ms. Dandridge a black eye by making her into a fad. This happened in the 1990’s when people saw a the “Malcolm X” movie. People who had never taken the time to learn about the man were wearing Malcolm X gear, simply because it was cool to do. Making our legends and hero’s into a style means that someday, they’ll go out of style (just as Marilyn Monroe t-shirts seems to have done). There’s nothing wrong with wearing images and symbols, but we must first acquire the knowledge behind those images.

I am a t-shirt fanatic. I have t-shirts of Prince, The Beatles, Earth Wind & Fire, Marvin Gaye, and James Brown (to name just a few). If anyone should ask me anything about any of them (and this has happened plenty of times), I could go on for hours about them. I’d have to love them that much to even consider buying a t-shirt.

I Too, Have Slipped Up. But It Was An Accident

I am a huge fan of George Michael. After he passed away on Christmas of 2016, I bought a t-shirt like the one he wore in the “Wake Me Up Before You Go-Go” video. A white shirt with “Choose Life” in black letters.

One day while wearing the shirt, a friend of mine said to me, “So you’re pro-life?”. I had worn that t-shirt a dozen times and no one had ever asked me that. I explained to him why I bought the shirt, and what it meant to me. I think I even said, “Pro-life probably wasn’t even a thing in 1984.”. Nonetheless, I immediately changed my shirt, because he was right. Regardless of what it meant to me, the world would see a clearly bohemian woman, with a giant Afro, wearing a very conservative slogan– one that I do not support. I never wore that shirt again. 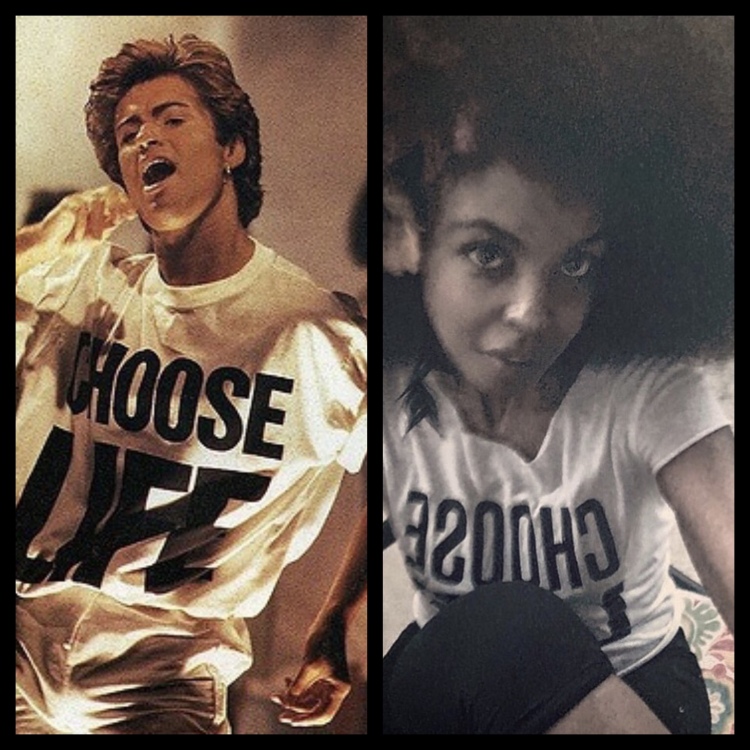 When my oldest son, Gabriel, showed me pendants of the Eye of Horus, and King Tut that he planned on buying, I insisted that he first learn the history behind them before purchasing and wearing their images. He did, and he is grateful for doing so. We cannot allow ourselves to become so controlled by what’s cool, or what looks good, that we do not stand for anything.

Tribal, spiritual, and religious symbols have deep meanings; and you should know about them, and believe in them before you wear them around your neck, on a shirt, or burn them into your skin. People are not always who they represent themselves to be for the media. It would behoove you take the time to learn about them, before you celebrate them. In the Information Age, ignorance is no longer an excuse.

You are voluntarily representing what or who you are wearing; so learn about it first. Because someone like me might ask you about it, in the check out line.

6 thoughts on “What’s That On Your T-Shirt?”